Drumcliffe Monastery
Drumcliffe is best known as the location of a monastery founded by St Columba, or Colmcille(meaning ‘dove of the church) in or about 575AD.  It was built close to Culdreimhne (Cooldrumman), just north of Drumcliffe on the slopes of Benbulben, where the ‘Battle of the Books’ was fought. 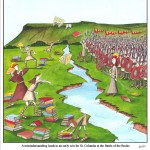 The Battle of the Books by Annie West, North Sligo’s Illustrator in Residence

This battle between the forces of Connaught and Ulster, in which approximatley 3,000 were slain, was the final outcome of a controversy that arose when Columba secretly copied a Psalter belonging to Abbot Finian of Moville.  This led to the High King’s famous judgement ’to every cow her calf to every book its copy’.

Remorseful for his actions, Columba left Ireland in 563 AD seeking to convert more souls than were loss in the battle.  In addition to Drumcliffe, he is attributed with the founding of monastic sites at Derry, Durrow, and Kells, but is probably mostly remembered for founding a monastery on the Scottish island of Iona.  There are no longer any traces of the monastery, which existed until the Fifteen century or so, except for the Tenth century high cross, remnants of other crosses and the remains of a round tower.

St. Columba’s Church of Ireland Church
Dating from 1808, Drumcliffe Church of Ireland church is a Board of First Fruits structure located on the site of the medieval monastery.  In its church grounds is the grave of the poet William Butler Yeats whose great grandfather was rector here.

‘Under bare Ben Bulben’s head
In Drumcliffe churchyard Yeats is laid
An ancestor was rector there
Long years ago, a church stands near,
By the road an ancient cross.
No marble, no conventional phrase;
On limestone quarried near the spot
By his command these words are cut:

Cast a cold eye
On life, on death.
Horseman, pass by!’ 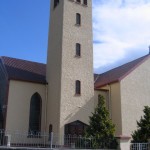 A short distance away from Drumcliffe churchyard, in the village of Rathcormac, is the Roman Catholic Parish of Drumcliffe’s St. Columcille’s Church.  Originally built in 1833 and renovated in 1963 with the addition of its distinctive bell tower.

Previously, there was also a Methodist Chapel at Drum (now a private residence, and protected structure), and a Presbyterian chapel (now a ruin) in Cloonderry. 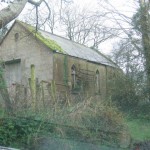