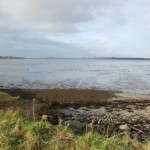 Holy Well, Doonerin
One of several holy wells once found in the locality, the well at Doonerin is unique in that is located on the seabed of Drumcliffe Bay and visible and accessible only at low tide.  It is traditionally visited by the faithful on the 9th of June, St Columcille’s feast day, when its waters are taken as a cure for a range of ailments.

Constance Markievicz (nee Gore-Booth)
Born into the Gore Booth family of nearby Lissadell, Constance Gore Booth, later Constance Markievicz, was an Irish nationalist who played an active part in the Easter Rising of 1916.  Sentenced to death for her actions, which was later reduced to life in prison, Constance was elected the first woman member of the House of Commons in 1918 while still incarcerated.  Following her release she was appointed Minister for Labour in the first Dail and died in 1927.  A statue of Constance Markievicz was erected in Rathcormac, at the bottom of Tully Hill over which, according to local folklore, she used to drive her horse tandem at speed.